“I want to become a writer!”

“Writer? You mean, someone who lives by selling the craps he’s written in books?”

“No! I never wanted to become a writer in your mindset. I would love to become a writer who loves writing, neither for acquiring public’s attention nor earn some penny for living, rather than doing anything else that makes him happy. I’m not saying anything against their dreams upon me; writing what I’ve in me on a piece of paper using my ink strangely makes me happy. I don’t know why!? It always help me to find out a real flow of happiness in me.”

“Okay! Act according to your wish. But keep this always in your mind that writing one or more books wouldn’t help you to fill your empty stomach whenever you feel like having something to devour. Never follow all those fancy- crazy imaginations in your dreams; chasing your unrealistic dreams in a real world would makes you unhappy at any point of becoming a writer. Don’t compare yourself with all those writers who’ve chased their dreams and became a well renowned writer in the history. Your writings aren’t that interesting for the readers like you think. And you know, this is 21st century; everything happens here for money and a reason. Although you’re 21 year old, you’re still so immature to accept such kind of implicit facts.”

“Have you ever thought about your future? How it would be if you’re an unsuccessful writer?”

“Don’t think too much about your craps right now! Earn something for yourself and lead a superb- cool life, Man. You’re not that bad to do it, I think”

Writer? Who is that? #quoted #onwriting 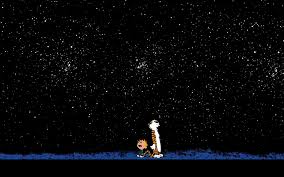 Stars in the darkness of sky

whispers, or glitters to have

an end for tonight.

“I like the night. Without the dark, we'd never see the stars.” - Stephenie Meyer, Twilight

Sometimes, I feel that aliveness

Is a narrative tale,

But a secret, seeing my daily diary

And a victory if I win in the archery

To sustain in my lifespan;

Waiting for a reliable,

The best way to escape from a problem is to face it directly!!

They invariably state that I’m an unlucky young man! Whatsoever I do, it commences with a full-ton excitement and goals with the official announcement as a failure. There are times when I stick into something, in front of a huge crowd and facing them like a dumb stick; poor to utter what I’ve in my head. They neither agree or differ with what I’ve to talk, but engages in a state between these two. Blindly saying, I’m a FOOL! Simply then, why should I worry about them? Cause they mean to be a part of my lifetime? Was I someone who belonged to them? I haven’t done anything for myself; they give advices and so I make out it. But why? Why can’t I do the things that I like to serve alone? I’m independently strong and have the potential to do it. I’ve a strong will power inside me to accept who I’m, what I’m…. I know, the society in front of cares me whenever they need me! They’ve their own personal ‘fears’ and wishes to be achieved in life. If I’m a rebel by choice, then why should I….?!

I believe life is an unpredictable encounter between you and experiences. It wedges into your thoughts whenever or however, hardly you need it. When there are possibilities for me to escape from their choices, I never think why can’t I fall up an answer for me- myself? Instead of exacting charge of my decisions, I’m engaged or try to opine in the way they think about me. How should they think if I do like this, or that? Shit! I shouldn’t have done that, they’ll definitely scold me for answering this. If that occurs, they might blow me down. I shall be alone to face those criticisms from their side. I can’t bear it, so far I’m a sacred soul living for others; a pattern made by using their paints and light touches.

I’m really new to these thought provoking subjects! I had been introduced to these facts when I came to explore certain written contexts by others recently. People call them as writers or authors! Authors? The ones who reveal out their life or experiences or weird-dramatic plots through the flow of words to others who go past their time in contemplating it? An old man or women who took up to be weird through his appearance and thoughts from me? Those who wish to or explore or walk all round the cosmos as if like a rootless wanderer, taking for their vibrant thoughts and constantly seeking to switch the different form of happiness and joyousness in them?

Ugggg!! These were a little skeptical view I’d about those groups of people. They exhort us to realize our aspirations through their compositions! Instead of discovering myself, our paths try to change in accordance with the backup of their write-ups, whether it’s a novel or narrative or verse. Briefly saying, I’m not only trying to bind together with what they’ve written in a 100-200 page book, but also straying away from my direct route to retrieve the real me- a hidden identity in me, to describe me from their perspective. Isn’t it irritating to do then? Nope…! Never…. This is where I stood up in front of a society in a real world till the daytime when I hightailed it from their bounds. They call me insane because what I’ve done is against their estimations regarding my identity. My attitude speaks the things they haven’t ever attempted to research! They exist for passing their time in their offices and bring in the money for the day-to-day transactions, so enjoying a safe-recommended life of the society, and then a happy home.

Be an optimist, do believe in miracles and don’t retaliate your desires and choices for others; you’re a unique human-existence in this world of curiosities. Yes, every soul in this universe is unique in one or other way, and then their views also. Let the challenging conditions satisfies with who you’re…. Don’t be a coward, you’re alert, speak it out whatever your mind says. But then, we can endure and realize the actual aim behind our life here.

Be an optimist, even if you've accomplished everything in your life.

They can’t hide their choices and decisions for others. Every one among them are like me or you. Yes, they’re also human beings. If we can lead a life in the way we create, sometimes irrespective of caring others, and accomplish whatever we want in life till the day of retirement from this planet so-called earth, then why can’t they do the same too? Perhaps, they’ve disabilities which we don’t have! Unlike us, they can’t either talk or see or hear me or you properly. Most of us would consider them as the unlucky fellows in the society we’re living. We might say they’re useless! But… But is this all because of their ‘fate’ factor that they’re subjected to all these frustrations and desperate conditions in life?

If you’ve a precise answer to those queries I’ve asked above, and then I shall tell you that you’re the right person for whom I’ve been seeking since the age of 15. When I come across this video, “2 cameras, 2 kids and a very different city of dreams”, I thought it would be a usual motivational or money-making business stuff. But by the beginning of the story in the video clip itself has welcomed me into a new thing that I haven’t ever seen before. Like, a new vision of hopes and enlightenment entitled together with a very clever title. I loved the innovative concept behind the running of  Koshish School for the Deaf located in a quiet corner in a city that welcomes million dreams.The little kiddos who have been slowly weaving their day-to-day moments for a bright tomorrow, together with the helping hands of a group of peaceful minded people made my day! In fact, they’re the real and blessed human beings who have been enjoying their life with utmost care and happiness.

The Journey Of Doing Right speaks a lot to you about these people- the ones who were born as the luckiest blooms of our living planet. Keeping the penny we’ve in our pockets does make us rich by prestige and show off’s, but it only lasts till the day when our life ends here. Meanwhile, if we can help people like them at least through a half penny we earn and put a smile on their innocent faces, it’ll definitely lasts forever, uh?

PS: I’ve written this post for the #DoRight contest, conducting by Tata Capital in connection with Indiblogger.

Naked paths inside my mind

Lingers back for a few memories,

Subjected to an innovative end,

Refreshed by a dozen

Loneliness is one among the best feelings in the world!